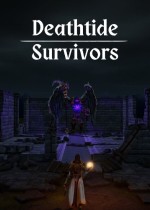 
Deathtide Survivors is a Hordelike (Horde-Survival Roguelite) where you fight powerful bosses and endless tides of the undead. Unlock ancient powers and create overpowered builds, conquer brutal challenges and become an epic bullet-hell Final Boss even hundreds of enemies struggle to take down.

While autocast Spells are fundamental to Hordelike gameplay, in Deathtide Survivors you have full control of special abilities that can change the tide of battle, making room for skillful plays and that powerful feeling of being unstoppable.


Items can be found in the shop, or on chests carried by Elite enemies and bosses.

The bulk of the undead horde is weak and mindless, but you will be challenged by the powerful Elite forces. With advanced Artificial Intelligence that reads the ever changing battlefield and works together to bring you down, you can expect a fun and engaging combat experience. Here are a couple of examples:

The Goblin Looter is not undead, and he doesn't care about anything other than stealing your precious XP!

Deathtide respects both casual and hardcore players alike. You can just have fun on Normal mode and pick whichever spell seems cooler to massacre endless amounts of undead, or you can dive deep into theorycrafting to make the most powerful builds imaginable to beat Nightmare mode.


You can check all your unlocks at the Library.

A Clash Of Titans

What better way to show off your might than toppling down giants? Each map comes with 3 fully fledged, multi-phase boss battles. Show them who is the real boss and bask in their epic loot.


Avoid the noxious poison of the Plaguebringer in Act I

An Ever Evolving story

Follow in the footsteps of the Deathslayer, a righteous Justicar fighting against Death itself during the End Times. You will explore a dead world torn by the ravages of time and conflict, finding pieces of history scattered throughout the maps, and reading about the lore on spell descriptions and character dialogues.

Each major update will bring a new Act: A new map, the next chapter of the storyline and vast amounts of content with new spells, talents, attunements, enemies, bosses, balance changes, etc...

I would like to thank everyone who read until the end of the page and has taken interest in the project! Deathtide Survivors is made by a single "does-it-all" developer, with the unconditional assistance of his wife. We hope to create a vibrant community around our game, and your feedback is always greatly appreciated. So make sure to join our Discord if you're interested in helping us shape the future of Deathtide Survivors and the emerging Hordelike genre in general.