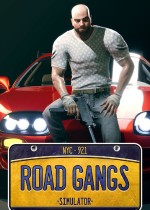 Do you sometimes think about the old days, when, as a kid, you were running with a piece of wood trying to 'shoot' your opponent, while you were hiding behind your neighbour`s car? Planning your own gang, acting like adults while smoking invisible cigarettes to add some seriousness. In Road Gangs Simulator you have a chance to fulfill your unrealised childhood dream, not only by driving fast cars and shooting each other with your enemies, but also by building your own empire!

DEMOLITION MODE
Don`t wanna hurt anyone but feeling like you could kick some asses? Grab your baseball bat and crush someone`s car. The game will let you destroy every car with the REALTIME DESTRUCTION SYSTEM! Every weapon will affect the system in a realistic way - you won`t be able to destroy wheels with the baseball, in order to do it you`re gonna need some ranged weapon, or a knife.


VARIOUS CONTROL MECHANICS
In the game we have an opportunity to control each member of the gang, his equipment, and also his actions. Do you like some good old RTS games? Then pick your squad and rush into a battle with the top down camera, and give them orders on how to defeat your enemies. If you`re not into RTS genre then you will surely enjoy picking one of your gangsters and controlling him with the TPS or FPS view, while the other crew`s members will take your back. You will get an opportunity to dynamically switch controlled characters - if you lose someone on a battlefield, no worries, just take the control over a next person.


CREATE YOUR EMPIRE
Every district you own have it`s advantages - one may have many car dealers to buy them cheaper, the other one will have a big bank which you can easily rob while having the control over surrounding buildings. If this is not enough you can expand every district with your own buildings - create gangster`s den to train your new crew`s members, build an armoury to provide your gang`s unlimited weapon and ammo.


TAKE A RIDE
Do you know someone who doesn`t like muscle cars, or classic japan sports cars? No? We neither, this is why we push many beautiful cars into the game, just to let you spend this dirty money you will earn by assaulting people. Stock cars are not enough? Of course they are not! Go into a garage and pimp it how you like, change body kits, wheels, paint them and create a dream car. Already made a car? Then just go and ride it on roads in this gangsta city - let every citizen know what you have made there!


MISSIONS
Your main goal is to take over the city. In order to do it you will have to face some enemies` gangs, earn some money, or just get some respect. During various assignments there is a possibility to do a bank robbery or to fight opposite gangs in the middle of a day. If you`re more like a pacifist, you can just swag in your pimped car so everybody`s gonna know who is the boss on a road.


CREATE YOUR STYLE
You`re a gangster, you have got to look like a one. Pick the best outfit out there, make yourself a badass looking guy, but be careful - your colors should match your gang`s colors, otherwise you can be considered as an enemy on the battlefield!