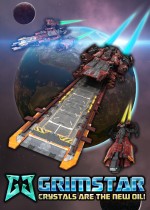 
The earth’s resources are depleted, and the energy crisis is imminent. But there is still hope – the discovery of a distant world, which is rich in a new kind of natural energy resource. The name of the new world is “Grimstar”. That is where your brother lost his life, and the laws of the company he worked for require you to take his place until his contract is fulfilled. So you set out to do your service and to discover more about your brother's death.... Grimstar is a real-time strategy game about exploiting a foreign planet as efficiently as possible.